You might think that reducing the availability of bottled water would cut down on plastic waste and increase the use of water fountains and reusable bottles. Not so, according to a recent article published on Glamour. According to new research conducted at the University of Vermont, which banned the sales of single-use bottled water, the ban […]

Visual Search Technology: The Future of Product and Media Queries

For over the past twenty years, an elite team of scientists, machine engineers, and developers has devoted their time and energy creating a system that successfully handles an array of visual search tasks in a way similar to how the human brain stores and processes visual information on a daily basis. Visual search technology is […] 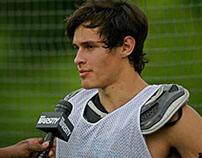 Notre Dame may be the number one lacrosse team in the nation, but they did not take for granted their position in the quarter finals against Albany, Inside Lacrosse reports. Notre Dame coach Kevin Corrigan was full of praise for his team as they recorded a 14-10 victory over the Danes and maintained their number […]

Last Tuesday, over half of the city employees in Parma, Missouri walked out on their jobs after the first African-American female mayor, 40-year-old former city clerk Tyrus Byrd, was voted into office. Until now, many of Byrd’s supporters argued that the walkout was racially motivated. Additionally, Byrd stated that she did not receive any resignation […]

Edward Snowden Bust In Brooklyn Has Been Replaced By A Hologram

The Group Of Artists Known As The “The Illuminator Art Collective” Are Not Related To The Three Artists Responsible For The Snowden Bust The Edward Snowden statue story just got a little crazier. It seems the trio of artists that put the original sculpture of Snowden in Brooklyn Park are not alone. Other artists have […]